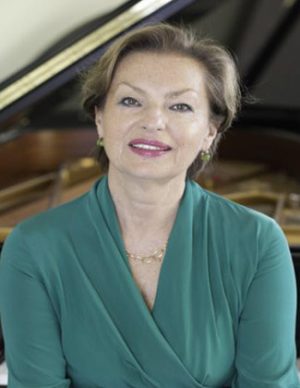 Barbara Szczepanska, born and raised in Warsaw, studied piano at the Frederic Chopin Academy. After graduation, she continued her studies with Professor Viktor Merzhanov at the Moscow Tchaikovsky Conservatory.

Szczepanska’s core pianistic repertoire includes the piano sonatas of Joseph Haydn and Ludwig van Beethoven as well as the piano oeuvres of Frederic Chopin and Claude Debussy. Concert tours have taken the pianist through her native Poland as well as Hungary, the former Soviet Union, Spain, Italy and Germany. After teaching at the Warsaw and Munster conservatories, she was appointed professor at the Robert Schumann Hochschule Düsseldorf in 1989. From 1999 to 2008 she held the position of prorector for artistic practice there.

Barbara Szczeparska has a special affinity for working with young students. Since 2008, she has expanded the study program for young students and developed the Schumann Junior Center for Gifted Students, which she directed until 2016.

In 2017, Barbara Szczeparska founded a piano competition for young pianists, the Robert Schumann Competition Düsseldorf. The competition will be held in February 2023 for the fourth time.