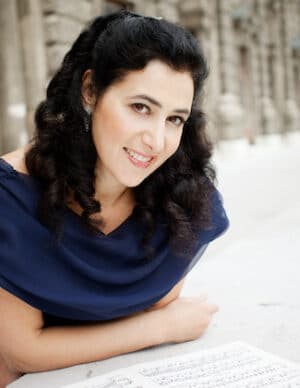 Born in Ukraine, Milana Chernyavska has established herself as an outstanding pianist, both as a soloist and as a chamber musician, since graduating in 1990 from the Tchaikovsky Conservatory in Kiev with Prof. Valery Sagaidachny. She complemented her education with master classes with famous pianists such as Alfred Brendel, Dmitri Bashkirov, Boris Bloch and Alexander Lonquich and master class studies with Prof. Margarita Höhenrieder and Prof. Gerhard Oppitz at the Hochschule für Musik in Munich. Milana Chernyavska performs reqularly at important international festivals such as the Lucerne Festival, Rheingau Music Festival, Schleswig-Holstein Music Festival and the Mecklenburg-Vorpommern Festival, as well as in major halls such as the Musikverein Vienna, Concertgebouw Amsterdam, Suntory Hall Tokyo, Munich Herkulessaal, Wigmore Hall London, Carnegie Hall New York and the St. Petersburg Philharmonic. She has won numerous prizes both nationally and internationally. Milana Chernyavska has performed with many renowned orchestras and recital partners such as Julia Fischer, Lisa Batiashvili, Arabella Steinbacher and the Vogler Quartet. The Milander Quartet, which she founded, has quickly become a sought-after ensemble. Since 2009 she has been teaching as a professor of piano at the University of Music and Performing Arts in Graz and also distinguishes herself as a musicologist.